The first built by Bard Balloons, was C-GEGM a custom, amateur-built Hot Air Balloon named “Lite-Bright”. “Amateur built” in Canada is called “Experimental” in the US.

In 2009, I embarked on a project of completely fabricating a hot air balloon from scratch. This is where Bard Balloons was born.

I purchased 550 yards of 1.3 oz silicone coated ripstop nylon fabric as well as some fire-retardant Nomex fabric for the mouth of the balloon (in red).  ¾” load tapes and special lightweight hardware rounded out the materials for the envelope.

I then spent the next few months, and over 150 hours sewing the envelope of the balloon. The envelope first flew in 2010. The completed envelope weighs 75 lbs, which is about half of what a comparable sized balloon weighs.

In 2010, I decided that I would build a balloon basket from scratch as well. The basket was constructed from aircraft-grade aluminum and covered with Cordura Nylon Fabric. Two circumferential “rings” of aluminum line the top and bottom of the basket, eliminating any bolts and protrusions on the inside of the basket which could injure the occupants.

An unusual feature compared to a typical “wicker” basket is the propane tanks that are fastened to the outside of the basket, keeping the basket clear for the occupants. The basket first flew in February 2012.

My completed Hot Air Balloon basket has a special floor – a Glass-Bottom floor (made of clear Lexan), making it one of only two Glass-Bottom Balloons in the world that are flying today!

Even the inflation fan was constructed from scratch (I bought a new Honda engine).  The only things I didn’t build are the tanks, the burner and the instruments. 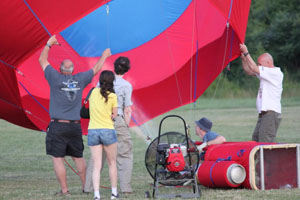 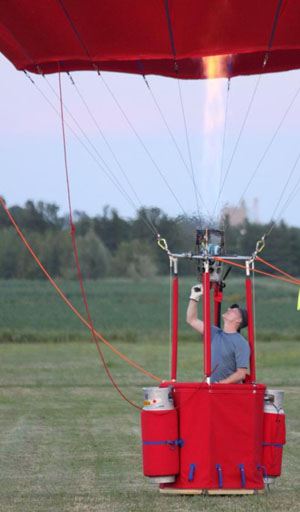 When flown, the balloon used to be chased by my little Civic, towing a small trailer. I now own a small SUV, which better fits my hot air ballooning needs.